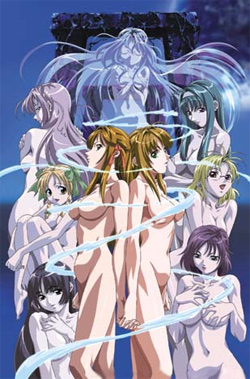 * Based on a game by Image Works.

"If you can get power strong enough to make the world at you own will, what will you do?" Kadomori Shizuku left a mysterious message to the classmate, Hosokawa Seiji, whom she had made love with at the first time, and she disappeared suddenly. Kasumi who was the twin sister noticed something wrong. Then she saw Shizuku calling up the unnatural power of Kadomori family to open the forbidden gate. The gate had been warned not to open, and Kadomori family had guarded the gate from generation to generation. Shizuku said, "I need power", and disappeared into the gate. To chase her, 6 girls who were to guard the gate gathers around Kasumi, and opened the gate to the unknown world. Then, a mysterious girl Sora appeared in front of them. What would be waiting for them who had destines they couldn't escape from?