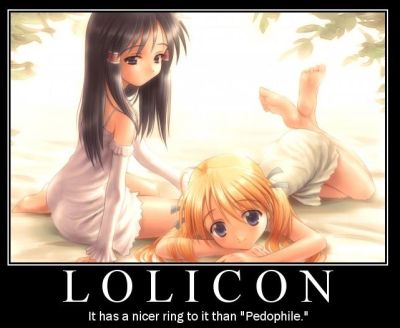 Related to this is lolicon, the Japanese abbreviation of the English phrase "Lolita Complex". Sometimes written as "roricon" or "rorikon" due to the inexact mapping between Japanese and English phonemes. This is the term used to describe the fetish/fascination some mature people have for underage girls. There is an entire industry in Japan devoted to providing legal but schoolgirl-themed pornography, taking advantage of the cute childlike appearance some Japanese women maintain well into their twenties.

Because the characters in anime are often young by convention, many fans think that a character can only be Lolicon if she is twelve or younger. Exceptions are granted if the other character in the relationship is a lot older.

One particular device used to skirt the boundaries of taste and legality is the exotic being (alien, creature of magic, robot or the like) which takes the form of an underage human girl, but is in fact for all other practical purposes an adult.

Another reason why lolicon is fetishized by people may be because some of them just view it as a substitute for their fetish for flat-chested, but otherwise well-developed, women.