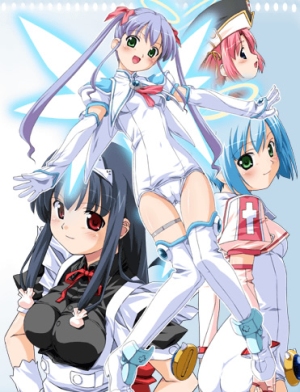 * Based on an adult game by Front Wing.

Otonashi Meimi is walking alone in an empty park when the demon Rococo suddenly appears. Rococo uses her Eternal Arm attack on Meimi in order to separate the power of Misty Mei from within her body.

Meanwhile, at Naoto's house, Hikari, Naoto's stepsister who was studying abroad, returns home. She starts going to the same school as Naoto, and it worries Rika, Naoto's lover, a little.

"I love you the most in the world." - With these words, Naoto makes love with Rika in the school nurse's office. However, Misty Mei appears and spirits Rika away. Then, the angel Luvriel appears saying that Naoto has no choice but to have sex with Hikari so that a new Jibril can be born to save Rika.

Note: The 4th episode titled 究極! 魔界天使より愛を込めて was initially planned for release in January 2008, but was canceled like all other Animac products after the company went bankrupt. However, the 4th episode was picked up by Milky (MS Pictures).