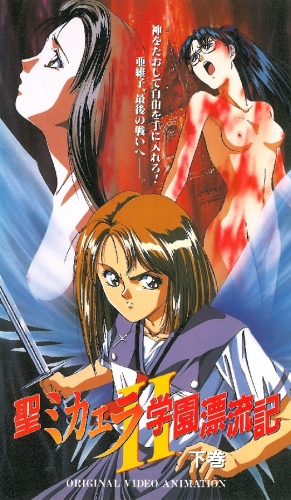 During the ill-fated Children's Crusade of A.D. 1212, Pope Innocent III double-crosses the loyal Christian soldiers and sells them to African slaves. Distraught at his betrayal by the very church he is sworn to serve, the children's leader, Hans, throws himself into the sea.
Centuries later, he is reincarnated as a hermaphrodite in a convent school, where he seduces the girls and leads them in a bloody revolt against the oppressive nuns. Seizing control of the nun's time tunnel, Hans (now called Aiko) and his/her chums travel back to Japan's Amakusa Rebellion, where they fight the evil Christians.

Eventually, all religions are wiped out in a worldwide atheist jihad, and the battle-hardened schoolgirls decide to go back in time again to save the original Hans.